Arowana fish happen to be paternal mouth-brooders. This fish produces small broods of fry. They take longer time to mature. Due to this, arowana fish fell prey to traders and are considered an endangered species.

Different countries, whose waters have arowana fish in them, have rules and regulations related to engaging in arowana fish trade. Some authoritative bodies even go to the extent of placing microchips in the body of each arowana fish in the fishing farms. This tagging helps them monitor the fish and make sure that fish was not taken from the open waters. 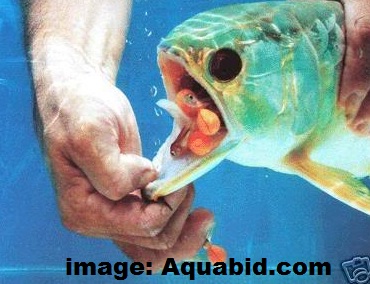 Arowana fish breeding and farming is a ripe industry. Trade of arowana fish pays well. Arowana breeders keep the adult arowana sizes in large shoals and big mud like ponds. Time after time, teams of farm labour use a seine net and walk through the ponds, collecting male arowana fish, which brood eggs or fry.

Great deal of care is taken in the handling of arowana fish. The male fish gets to get larger aquariums. Their mouth is slightly help open to increase the possibility of fry falling out. Later, the male fish is taken to pond so that it could fatten up.

There are between 10-20 eggs in each clutch dropping out of their mouths. The average diameter of eggs is 15 millimeters. Male arowana brooding eggs and fry can be spotted easily. The reason behind this is that their buccal cavities are quite apart.

The eggs are going to roughly take around one week to hatch. Upon hatching, a 1 centimeter long fry shows up on each egg and remains attached to its ground position (i.e., the yolk sac).

Another month passes by, and you find the fish reached a size of 2-3 centimeters. By now, they start using nutrients from within the yolk sac. After another week or two and the yolk sac becomes much smaller. The fish start taking shape and make attempts of swimming. Two months after that, they are released by the male and are free to swim.

To avoid the risk of predators, farmers take away the offspring and rear the fry in separate tanks. From this moment on, it takes the fish about another year before they become of the size which can be sold.

You may find that breeding these fish can make you some good money because they price these fish pretty expensive. The only problem we see people run into is not being able to sell the fish fast enough and then they have a giant loan of fish on their hands. Try to have an escape route if you get out of hand with fish to fast.

Have Any Comments to Add?

Posted by Vinny Trene:
Great share here, but I’m in search of a total in-depth guide to breeding these fish. I want to start making some crazy money doing this and I need all the small gritty details that come down to having great turn outs on breeding these fish. Anyone know of a crazy good guide? or maybe even a video or e-book?

Reply from Brandi T:
You will quickly learn that these awesome breeders aren’t going to just hand over their secrets to making lots of money selling these beautiful baby fish. Really the only way to learn is to read all of the guides and live the experience of actually failing at it over and over. The best breeders out there have been doing it for decades. It’s not a “weekend gig” that you just pick up for extra trash. These players know their stuff. I’m trying to decide what species is my favorite.

Posted by Nathan Uran:
Yeah… I have been searching for “that amazing” guide too for years but just.. cant… quite.. get my hands on it. haha. I do understand the tricks to the trade now to creating job stability of not letting out the good secrets that the pros know.